Before the entrance of the old Town are the aquarium, the Villa Vianelli  with a loggia and a theatre built in 1845. In the first street opposite the theatre is on the left side the Angelo d’Oro hotel and the small Church Of Our Lady of Health and built in 1779.  On the end of this street is a lighthouse and Venetian bell tower of 57 meters high on the hilltop that was completed in 1677. From this place, near the Church st. Euphemia is a view on the islands of St. Catherine and the Red island where was a Benedictine Monastery from the sixth century, and later used by the Franciscan till 1820.

On the place of St. Euphemia were before three other Churches: St. George, St. Ursala’s and St. Michael. The church is built in Baroque style in three phases. From 1654-1677 the bell tower, the three-naved church from 1725 till 1736, and the three altars in 1741.On this place are also the remains of the town walls.The patrones of Rijeka was St. Euphemia and her bronze sculpture of almost 4 meters is on the top of the tower.

Not far away from the St. Euphemia  is a smaller Church of St. Thomas  built in 1388, and restructured many times. The last time in 1963. From here  is a vault underpass that leads to another street. On the end is a yellow building on the left named  the Oratorial of Our Lady from 1482.

On the right side of St. Euphemia is another small Church of St. Joseph from 1673  on the street  Grisia with a lot of art shops.  On Grisia street are nice palaces and on the square down the hill are two Renaissance houses built round 1580. Twenty meters from this square  is the Municipal palace  (Venetian Podesta’ palace) with coat of arms and a Lion of St. Mark. Built in 1332 and later on restructured several times.. Here is too the back of of the Baroque Balbi gate that was built in 1680 and named to the builder and Podesta of Rovinj. On the gate are coat of arms and a big Lion of St. Mark with an open book. Opposite the gate is a clock tower that dates back to the 12th century.

The canal that separated the old town was located back of this building to the place of the theatre Gandusio, and is filled in in 1763. From here in the direction of the theatre is on the left side is the palace that belonged to the family Califfi and built in the 17th century, and houses now the town museum.  In front of this museum was a bridge tower from 1563.

In the southern part of the old town is the batana house museum. Batana is a flat bottomed barge with a long history. Here is  also the gate named St. Benedict or seashore gate from 1589, and a small church of St. Benedict. Another gate in the southern part is the gate of St. Cross or the naval gate from 1589 . The church of St. Cross is built a few years later (1592). On the other side of the bay is the Church St. Nicholas located from 1364. Also there is a heptagon Romanesque building. This building is named the Chapel of the Holy Trinity from the 13th century.Other churches direct from here are Church of Our Lady of Kindness with a porch from 1584. And in the main  street  the red facade of the Church of St Charles from 1650. An other small church in this area is the Church of St Martin from 1589.

From the main street to the hilltop is a large square  with two baroque houses from the 18th century, and on the hilltop the Church of St. Franciscus d’Assisi from 1750 with the attached Monarchy built in 1702

The area of Rovinj was inhabited in Prehistoric times, and the settlement was a town. In he Roman period was here a Castrum (named Ruginio) probably built on the place of the Church of St. Euphemia. After the Roman period Rovinj was occupied by Gothic, Byzantine Empire and Langobarden, and was many times attacked by Naretva – Croats- and Saracens pirates in the 9th and 10th century.
In the 12th century offers Venice protection, after an oath of fidelity, and Rovinj is subjugated to it till 1283. The authorities until 1797 were for Rovinj the time of constant grow. After this year Rovinj became part of the Austrian Empire. 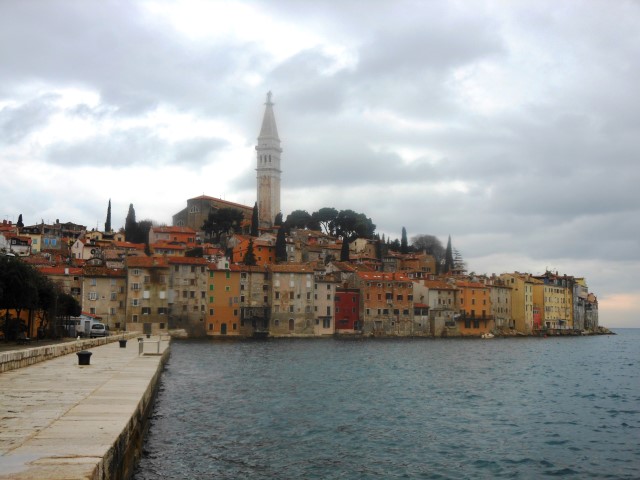