Labin is located on a 320 meters high hilltop and was an important mining centre. A part of the old town was above the coalmines, with all the risk of cave of the earth.  In 1972 the mining of coal is stopped.

On the road to the centre of the old town is the small Church of the Saints Cosmas and Damian from 1450 with a monument  in honour to Matthias Flacius Illyricus. Labin was the birth place of this Protestant Lutheran reformer from the 16th century.

On the main square – outside the old town – is a Venetian round bastion from 1604, with in front the old town gates, named St. Flora. The old gates were from 1587,when also above the gate the Chapel of St. Flora was built.  On the gate besides coats of arms, and a Lion of St. Mark with an open book. Other buildings on the main square are the Municipality building, The Venetian loggia  from 1662 (restructured in 1777) with a collection of Antiquity, and the Magistrate’s Court building (from 1556).

Inside the gates are several patrician palaces from the baroque period, and a theatre with tower from 1844. This was a former grain storage house that dates back into 1539. In the passing to the court yard is a museum of mattheus Flacius Illyricus . Back on the left street is the town hospital (16th/17thycentury), the house of the family Negri, and the Church of St. Mary of Carmel from 1615 and the house of the family Manzini.

The oldest wall’s were made by the Aquileia Patriarchs  and partly made by the Venetians in the 15th century.

On the eastern walls  are several monuments of prominent Istrians.

The old prehistoric town was later a Roman settlement named Albona and had a status of municipality. It got the water from aquaduct that was built from the Učka Mount until Pula.

After the fall of the Roman empire followed the Gothic Dominion and the Byzantine Empire. At the end of the 6th century Labin was destroyed by Slavs inroads, and later on dominated by Longobards and Frankonians of Charlemagne. From 952 until 1208 various Marquis families dominated the area.  In the 11th and 12th century Istriai had an important immigration of Slav population.

From 1207 until 1420 Labin was  under the Aquileia Patriarch dominion. After the fall of the Aquilea Priarchs Labin passed to Venice Republic and remained part until 1797. 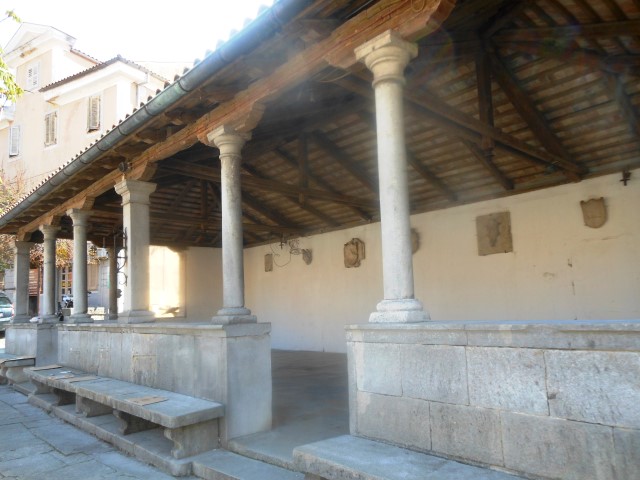