Poreč was a prehistoric settlement and later on turned in a Roman castrum, military base.  Situated on a peninsula of about 500 meters long and 250 meters large.  The first century the town got the status of colony, named  Colonia Julia Parentium, with special rights and liberties. The main street  from the east to the west direction is the Decumano, and the north-south intersection is the Cardo street.

After the fall of the Roman empire was Poreč in 539 part of the Byzantine Empire and the Bishop Euphrasian started  to built the Baselica.  In that period  their power increased at the end of the first millennium.

Poreč and other  coast places suffered under the attacks of pirates, but the Bishops were rich and strong. In 983 they nominated themselves Counts of Vrsar and owned a part of Vrsar and other Istrian territories by donation of Kings like Ugo of Provence, Ottone II and from the Aquileia Patriarchs.

In the second part of the 15th century and the beginning of the 16th century was also the period of plague. Reasons for the Bishops to escape from Poreč to Vrsar. Also the time that  the Venetian Senate  excepted immigrants from the Balkan. The colonisation was interrupted by another plaque year in 1631 and reduced the population to a few hundred people, but increased in the 18th century by the influence of Bishop Negri and in 1771 Bishop Franscesco Polesini.  With the fall of Venice in 1797, Poreč became a part of the Austrian Empire.

On the North side of Poreč is the Euphrasius Baselica and built in the 6th century on the place where in the third century stood an older church dedicated to St. Maurus.  Impressive parts of the baselic are the mosaic in the apse, and a marble baldachin, standing on four columns.

In the centre of Poreč on the mainsquare is the Church of Our Lady that dates back into 1770.  In the Decumano street is a Pentagon defence tower built in the 13th century, and was a part of the town walls that surrounded Poreč . On the northern side is the second defence tower from 1437 , named Fisherman defence tower with the old town walls.

In the Decumano street are several Gothis palaces. One is from the Lione family from 1473. Another is the baroque palace that belonged tot he family Sincic and houses the Museum of Poreč from 1884. The museum has the findings from the archaeological site Picugi. A few meters more there is a Venetian house with a “bifora” and this was former the De Cleva family house.

At the end of the Decumano is a large square withe Venetian houses . On the right side the Zucchato Palace from the 15th century. Opposite this building there is another Gothic palace with Venetian “monofore”, that dates back into the 15th century.

In the Decumao is left a Romanesque house from the 13th century and a well from the 15th century.

After the Decumano is an other square , named Marafor. This is the oldest part of the town, and has Roman temples. The ruins of the Temple of Mars and the Temple of Venus, both from the first century. On Marafor is also a baroque facade  on the the former Bassi family house.

Near by Marifor is the Istrian Parliament building and a Franciscan church from the 13th century . 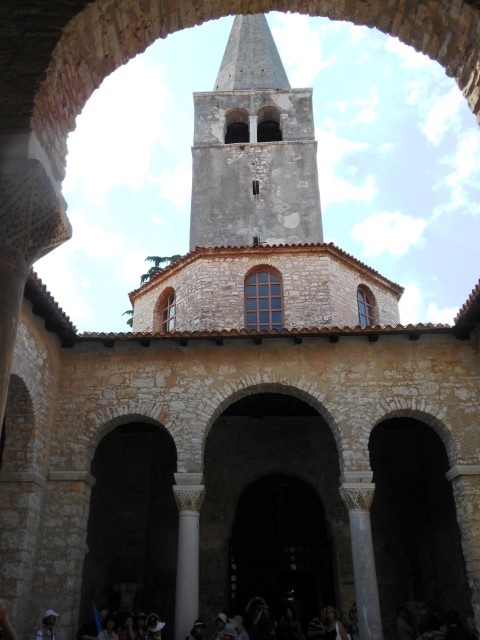