The most important periods of Pula were the Roman and Austro-Hungarian Monarchy, partly due to the location on a well protected and deep bay, so a good place for secure anchorage.

The most representative monument is the Arena. The construction started in the Roman-period by Emperor Augustus 2 years BC, expended by empire Claudius and completed 81 years AD by emperor Vespasianus. The amphitheatre in the form of an ellips is 132,5 m long, 105 m wide and 32,5 m high.

For an idea of  Pula’s structure is opposite the Arena near the park a bronze map of Pula. Nearby in the direction towards the hilltop is the Orthodox Church of St. Nicholas, built in the 6th century and restored in the 12th century and houses a iconostas. Back to the main road  are the Roman gates the “Twin gates”. One of the twelve gates in the Roman Period, and built in the 1st and 2nd century. Only three have been preserved. Near the Twin gates are the remains of the town walls, built in the 2nd, 3rd and 4th century,  and gives an indication about the town border. The stones in the walls have different colours, this indicates the difference between older and newer walls.

In the park located opposite to the Twin gates, is an octagonal Roman Mausoleum from the 1st century. Inside the Twin gates is the Archaeological Museum. At first since 1890 a high school and from 1930 a museum.

Above the hill near the Arena is a white bell tower from the Church of St. Anthony from Padua, built in 1931.

The next gate in the town wall is the Hercules gate from the 1st century  and decorated with the head of Hercules, the town patron at that time. After the entrance is the seat of the Italian Community. In the same street is the entrance to the “Zero Strasse, the underground tunnels under the old town and erected during WW1 to provide a shelter for people in case of air raids and  ammunition storages.

Opposite the Hercules gate is white stone Fascist building made beginning 20th century. On the square in front of this building are hackberry trees.  This place is also known as the place where people made important decisions. At the end of the square is the “Golden gate”, the Triumphal Arch of Salvia Sergi of the 1st century BC and built in honour of three male members of her family that took part in a battle.

At the end of the street is a steel building structure. This is Pula’s market from 1903 and built by L. Nobis in Art Nouveau style.

The main square of the old town is the Foro square. Here before is the Church of the Holy Heart, and in a park some Roman sarcophagus. In a corner under new buildings is a Roman house floor with ” The punishment of Dirce”, and nearby the Chapel of St. Maria Formosa from the 3rd century. In the Sergi street right towards the hilltop is the Franciscan Church and the Monastery from the 13th/14th century. Not far away from the Franciscan Monastery  is the Venetian Fortress, named Kastle and built in 1630. In the prehistoric time there was a hillfort settlement of the Histri tribe.  On the main square in the old town (Foro square)  is the Temple of Augustus, built between 2BC and 14 Ad and dedicated to Augustus.Besides this temple is the Town Hall, built in the 13th century and restructured many times. on the backside are older remains of another Temple and likely dedicated to Diana. The third Temple that stood in the middle of the square was dedicated  to Pula’s Patron Hercules.

In the street that goes from this square (Kandlerova street) are nice palaces. Demartini palace (16th century  with trifora. On the left side on the first square is is Pula’s cathedral  with a big tower. The cathedral was erected on the foundation of a Temple from the 4th century and the name is St. Thomas. The church is completed in 1712. The bell tower in 1707.

During the period starting from mid 19th century with the Austrian Empire and the Austro-Hungarian Monarchy Pula made a strong development due the decision to turn Pula in a major naval port. From a few hundred inhabitants till 50.000. Buildings from that time are the Admiralty building (1861), hotel Riviera, the Archaeological Museum (1902), the Shipyard, Military fortress defence system around Pula, Villa’s in Veruda, a railroad and a Naval Church from 1898.

After the fall of the Roman empire in 476 Pula became under the rule of Goths, the Byzantine Empire. In the 8th century  the Frankish Kingdom, the Longobards and Charlemagne brought the new feudal system with them which enabled the settling of Slav, Croatian farmers but brought the resistance of Istrians towns. In 1150 Pula swore allegiance to the Republic of Venice and thus bound to Venetian  economical  and political aims which defined its development for the next few centuries. During the 14th, 15th and 16th centuries Pula was attacked and conquered by Genoese, Croatian-Hungarian and Habsburg armies, causing the devastation of numerous medieval settlements and villages. besides the wars, the population was decimated by numerous epidemies of plaque, malaria but due the geographical position the town was saved. In 1848 the Austro-Hungarian started with the development of Pula. 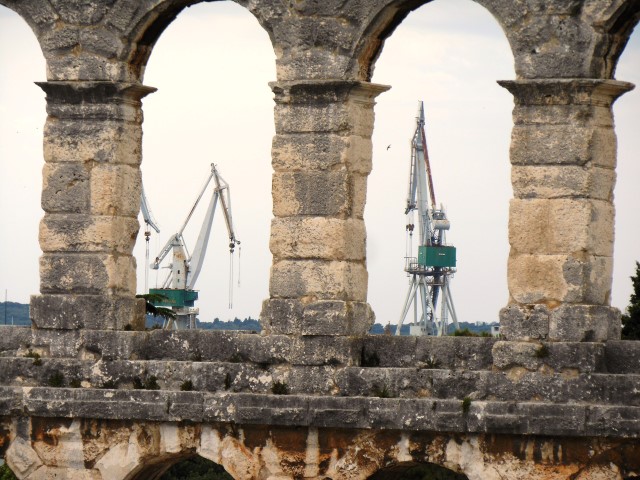